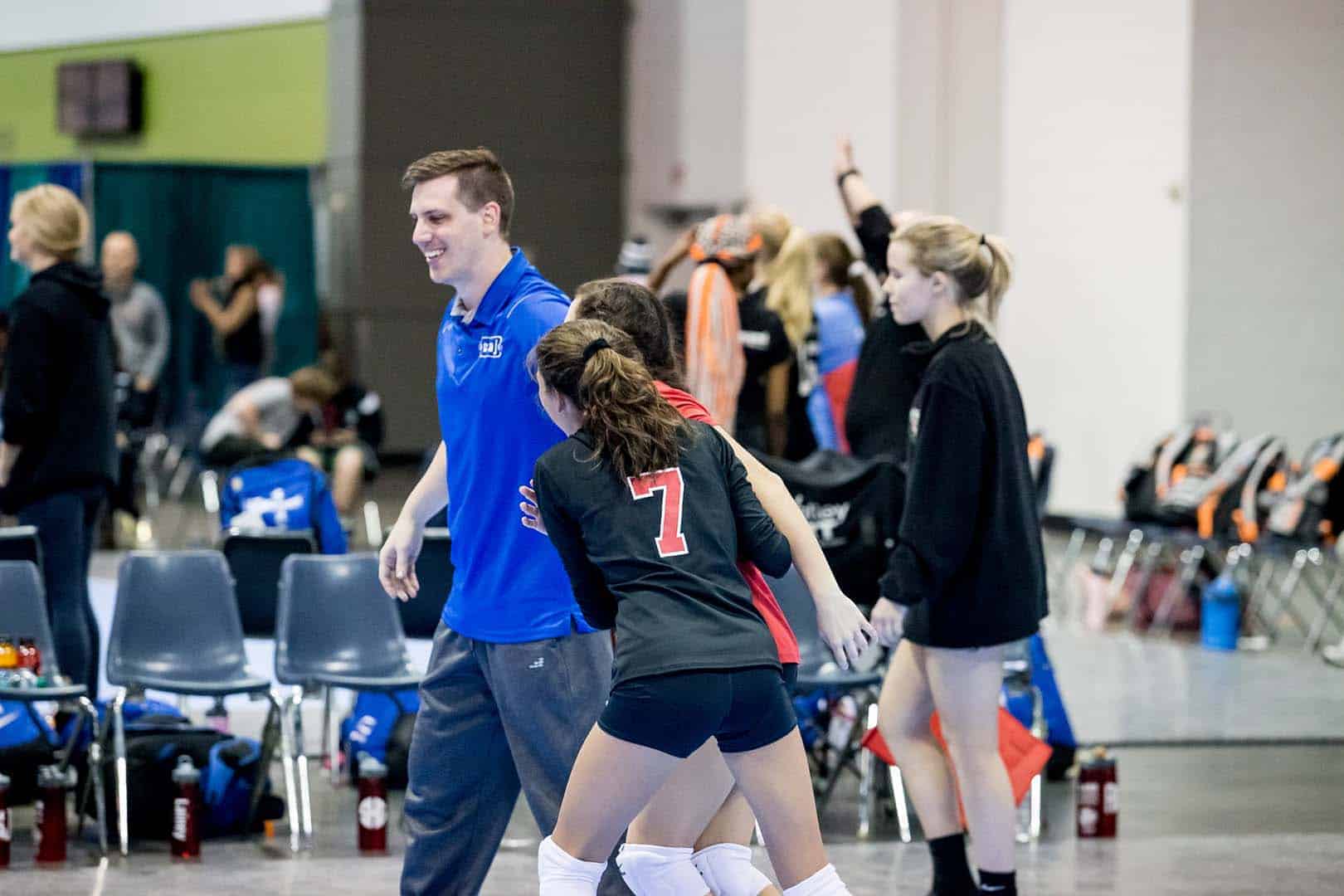 Stuart Briscar is in his 8th season of coaching volleyball. He has coached Middle School, High School, and USA Club Volleyball. He has also lead several clinics for athletes as young as 7-years-old.

Stuart is passionate about the game of volleyball and coaching young athletes to not only perform better on the court but to be better prepared off the court as well.

ThriveVolleyball.com is one way that Stuart is able to share his passion and knowledge of the game with players and coaches as well. On this website, you will find a variety of Drills and Strategies that can be used with any level of volleyball team.

You can also subscribe to Stuart’s Youtube Channel where he answers volleyball questions as submitted by players and coaches.

Here is what Stuart says about coaching volleyball:

“Coaching is more than just winning and losing — it’s about developing athletes to be leaders, encouraging them when they get down, cheering them on when the match is on the line, and celebrating all of their hard work when they come out on top.”

What the players say:

“He is so proud of each of his players when they make a good play. Even when I shank a pass or hit the ball into the net, he is proud of me for the effort I show. When we lose a game, he helps us improve our strategies to get better the next game. He is never overly competitive or angry. Coach Stuart is a cheerleader; he puts every ounce of himself into making me and my teammates better athletes.

“I enjoyed having Stuart as a coach because he pushed me to do my best but kept it fun.  He also helped to make me a better leader and smarter player.  He really cares about all his players on and off the court.”

“Coach Stuart has been an integral part of my growth as a volleyball player on the court and a positive influence off the court. As my coach for the last two seasons, he has provided a safe, instructive, challenging and fun environment for me and my teammates to stretch and expand our knowledge of the game and our individual positions and roles. Coach Stuart places much needed emphasis on team unity, mental toughness, discipline and self confidence in our approach to sharpening and refining our skills and creating successful team chemistry.  His methods and expertise produce positive results and an environment that cultivates mutual trust.”

“From the beginning of the season Coach Stuart has walked into every practice, game, or anything volleyball related with a smile. His passion for volleyball and coaching shows immensely. He has helped me and my teammates become better players, physically and mentally. His excitement when we play makes the game 10x more fun. Seeing him jump up and down on the sideline even when we’re just attempting a new play or being aggressive is one of the funniest and most exciting things to see during games. He is enthusiastic and has pushed me and my team to become the best players we can be.”

“Coach Stuart is a phenomenal coach. He pushes his players to get better at every practice, game, and in every conversation. Not only is he patient with his players, but he cares for them not only in the world of sports and competition, but about their mental health and well being. Our team was successful under his coaching and will forever be improved because if him. I am so grateful for the opportunities he has given me.”

“Coach Stuart has made us a better team not only in practice but on the court. His energy is literally so crazy and he hypes up as a team and is always proud of us in the end. Out of every coach I have ever met I have never had a coach like that.”

“Coach once said to me “when y’all lose I feel like it’s my fault”. He put us first always and you can tell how much he truly loves the sport and how much his heart is in it. I have learned more from this season not only about how to play volleyball but about how to be a better person for my team.”

What the parents say:

“Coach Stuart has incredible enthusiasm for the team. He is very positive and encouraging and celebrates their effort. Coach Stuart comes to the gym early to give those who want extra time before each practice. He also is a great communicator to the team (and parents) about takeaways from each tournament. I love seeing how much Coach Stuart loves volleyball and loves his players – it definitely shows in everything he does!”

“Stuart possesses a unique combination of solid instruction, fun, and encouragement. The players want to give him and their teammates their best because he provides a safe and accepting environment to be stretched and challenged”

“This is our second year with Coach Stuart and both years he has gone above and beyond motivating the girls to be the best that they can be. He teaches them both volleyball and life skills that they can use forever. He is always upbeat and full of energy as well as always looking for new ways to teach the girls.”

“Stuart has achieved a unique balance in his approach to coaching that utilizes relationship and player development over a “play to win at all costs” mentality. He brings passion, enthusiasm, encouragement, sound foundational training, strategy and FUN to the court every single time. His players know and trust him and accept and learn from his feedback and constructive criticism. He greets every play, large or small with a definitive positive response. Mistakes are met equally with a smile, a quick encouraging word of correction and a “you’ve got this” sign of support. His players want to learn and play their best for him and their teammates. He empowers them to be critical thinkers, communicate effectively, execute plays, employ mental toughness and celebrate one another, win or lose. His consistent methods of coaching, exceptional communication skills and positive, encouraging demeanor instill not only trust in both his players and their parents but also produce a team and family dynamic that is unmatched and highly sought after. We all learn many life skills to be practiced on and off the court due to his selfless investment of time and energy while sharing his gifts and talents.”

“Stuart has been one of the best coaches we have had at CAJ. He is passionate, hard working, and truly cares about the team, on and off the court. He has taken a mediocre team and made them a very good team in a few short months. And something I have never experienced on any Club team…all parents liked the way he coached.”

“Coach Stuart is an AMAZING coach! He is very knowledgeable about volleyball and his teaching techniques work. My daughter has improved tremendously since being on his team! He shares videos and individual stats and group stats which are extremely helpful.”

“Stuart is such a good teacher, both of the techniques, and the mindset needed. The practices were fun but very instructional, and he was instrumental in keeping the girls focused during the toughest of tournament matches. The whole team got way better with each week, and the end of season tournament play reflected that in a big way.”

What other coaches say:

“Everyone loves Stuart. He is always so eager to help and improve Cobb Atlanta in any way that he can. He always brings a positive energy with him. Stuart’s teams always seem to gain so much in the season they have with him. His teams love him as a coach and would play for him over and over again if they could.”

“Stuart’s energy is contagious. He loves the sport so much and you can see that in every minute he spends with his team. He is always coming up with new ideas to challenge his players both on the court and as people — he creates a great team bonding atmosphere. I love the way he leads by example by participating in the challenges online and sharing his ideas for keeping his team connected with others.”

“Stuart is truly one of the most passionate coaches at Cobb Atlanta. Not only does he love teaching and sharing the love he has for the sport, but he’s constantly working to build on his own knowledge of volleyball. He is driven by this passion, and it is evident how much he cares for each and every player he has the opportunity to work with. His goofy and lovable energy make him a pleasure to work with. He truly embodies the values of Cobb Atlanta.”

– Nominated for Coach of the Year

– Nominated for Coach of the Year

– ATL Head Coach of the Year

– Nominated for Team Performance of the Year

– Nominated for Team of the Year

– Head Coach of the Year

– Team of the Year

– Nominated for Team Performance of the Year