How to Make Better Mistakes in Volleyball 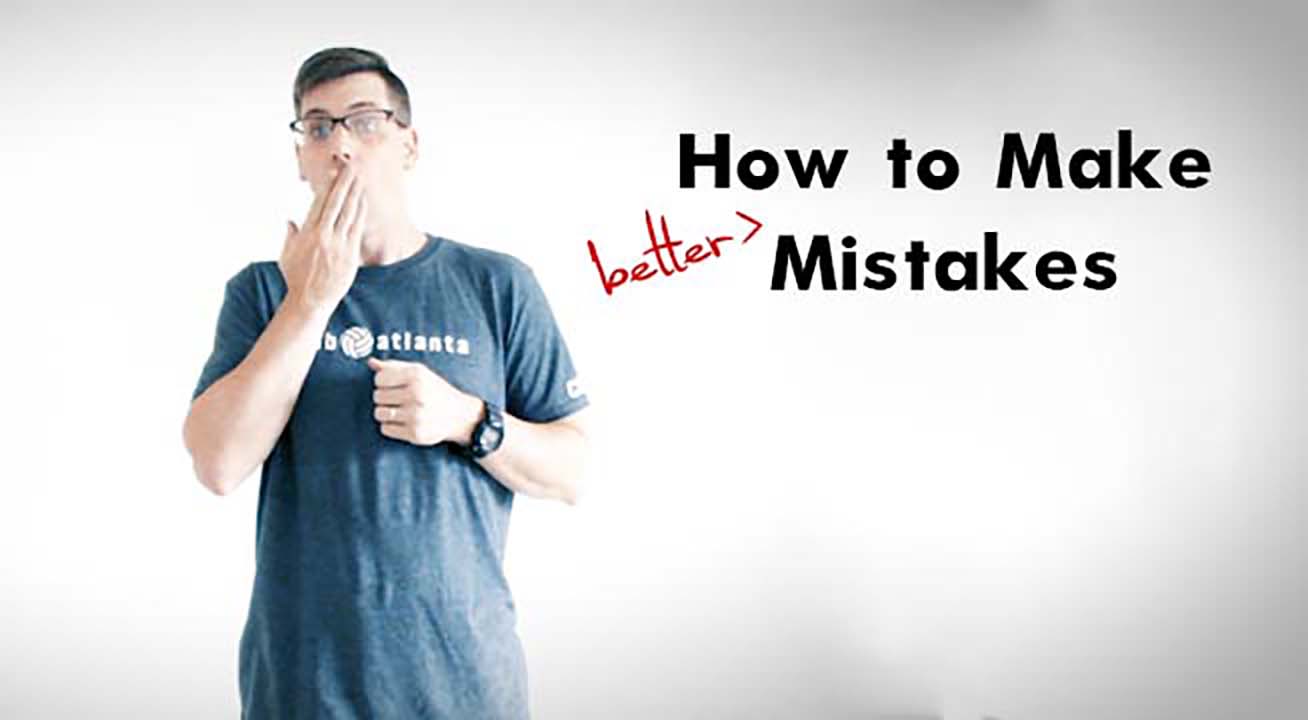 Making mistakes is part of volleyball. There’s no way around it. But hopefully, with a little bit of practice, you can learn to make better mistakes which will then lead you to be a better volleyball player.

Before we learn how to make BETTER mistakes, we first have to understand WHY we are making mistakes in the first place!

Here are 3 Reasons Why We Make Mistakes

This may be the most obvious reason why we make mistakes, but it is important to understand our own skill level so that we can understand how to get better. Maybe you are shanking every pass… maybe you keep serving the ball into the net… These sorts of things happen to every player at some point, but making these types of mistakes doesn’t have to be the norm.

2. We don’t understand our role and what we are supposed to be doing

Are you confused about who gets the second ball or how you are supposed to transition from Defense to Offense? We’ve all seen the player who is wandering around the court looking a little lost. She’s more of a spectator than a player. Chances are, she doesn’t fully understand her role and what she needs to be doing.

A lot of inexperienced players struggle with confidence and because of this, they tend to not be as aggressive. Players who lack confidence tend to have more dropped balls, serve the ball out, and make more bad passes.

Now that we understand WHY we make mistakes, let’s look at how can we make BETTER mistakes?

First, we have to understand that it is OKAY to make mistakes!

Now, I know that some of you play for a coach who yells at you for any mistakes and I apologize. That’s their way of showing that they have no clue how to fix the problem and they’re displacing their anger onto you. :-O

Sorry. Had to call some coaches out real quick.

However, if the reason you are making mistakes is because you’re being lazy then it actually is your fault the coach is upset :-O

The more you play volleyball, the more you will start to understand what works for you and what doesn’t work for you. After you make a mistake, ask yourself what the reason was…

Are you late on your approach causing the ball to go into the net?

Are you contacting your serve behind your head giving you that rainbow serve?

Did you forget to follow through on your swing?

Asking yourself these types of questions after each mistake will help you focus on doing it the correct way.

When players make a mistake, they tend to draw back and not play as hard because they fear that they are going to make other mistakes. Remember. Mistakes ARE NOT bad. Keep asking yourself WHY you made the mistake. And then keep swinging hard until you can work out the kinks.

3. Ask your coach what you should be doing…

Sometimes, it can be difficult to diagnose our own problems because we can’t see what we are doing. But having another person, such a coach, showing you what you are doing wrong can give you a really great perspective. Ask the coach if they can record you on your phone so that you can see what you are doing wrong and then you can take the video home with you and keep practicing.

Most players have no clue what they look like, so to them, it feels like they are doing it right while, in reality, they look like they’re trying to shoo a fly away.

Most important: Have confidence that you will get better.

I know that making mistakes can be frustrating but if you believe that you can get better, then it makes it easier to get better. There are a lot of things you used to be bad at, but then you kept practicing until you got it right… Riding a bike… Spelling your name… Tying your shoes

You were really bad at these things when you first started learning them but now you don’t give it a second thought.